Gerry Leonard: The Dubliner who became one of David Bowie’s six-string sidemen

Many an Irish musician has made the trek from Dublin to New York in search of work and adventure. Some have settled in or around the Big Apple, syncing with the city’s unique artistic buzz, but none has achieved what Clontarf guitarist Gerry Leonard has: in the past 15 years, he has been a member of David Bowie’s inner circle of musicians and creative thinkers.

Leonard featured on Bowie’s “preretirement” albums, Heathen (2002) and Reality (2003), and was then called up for duty on his “comeback” album, The Next Day (2013), on which he cowrote some songs. “Can Gerry rock?” was the first question Bowie asked of him back in the early 2000s. Fifteen years later, we think we know the answer to that one.

He now lives in upstate New York, 145km north of New York city and close to Woodstock. Leonard relocated from the city in 2004 through “a romantic notion to have a motorcycle, a guitar, a girlfriend, to make records. The plan was to come here at the weekends to read a book and play guitar. Ten years later I’m still here. I’m married. I have a daughter. The guitar is here but not the motorcycle.”

Whatever about the wheels, Leonard has always had the guitar. In the 1980s he was a member of Dublin bands the Spies, Above the Thunderclouds, and Hinterland. That last band, a duo with Dublin musician Donal Coughlan, signed to Island Records and in 1990 released a fine, underrated debut album, Kissing the Roof of Heaven before splitting in 1994.

Leonard, a likeable, savvy person with a serene streak, fondly recalls those struggling artist days. “The Hinterland thing was nice because myself and Donal finally started to define our work a little bit more than we had done in previous bands. Also, the fact that we got interest from major labels was very exciting. It pulled up the curtain on the window of dreams a little bit. We got to peer through and see where we might end up. None of that really transpired, but it was exciting to think that it might. The memories are probably a little bit rose-tinted, but I’m okay with that.” 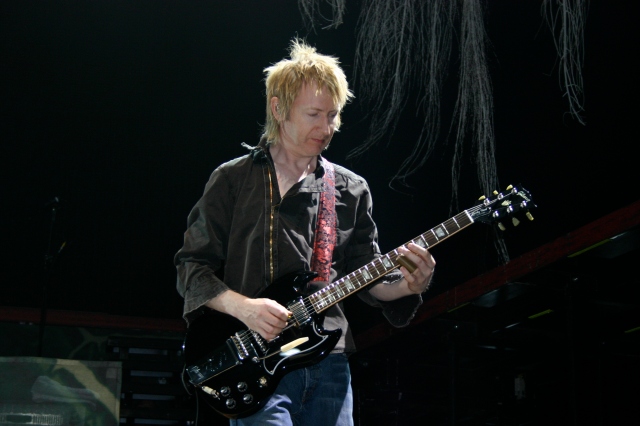 Leaving Dublin in 1994 for New York, Leonard put himself about as a guitarist for hire. He didn’t have to wait too long for his skills to be pounced upon, as a Dublin friend, Kevin Killen, introduced Leonard to various New York musicians (Killen is a producer and engineer for the likes of Peter Gabriel, U2, Kate Bush and Elvis Costello, and also worked on David Bowie’s new album, Blackstar). One musician in particular took him under her wing.

“Kevin was producing Laurie Anderson’s album Bright Red. So initially I got to play on one track, but then it ended up that I played on a few more.”

Anderson and Leonard soon became good friends. “She is a great spirit and a warm person,” he says. “I felt like a fledgling in New York at that point, and she really encouraged me to work on my own original material. She was definitely one of my champions.”

Despite help from such influential quarters, a living had to be made. He quickly realised that he had to apply a more stringent approach to work than the Dublin attitude of “ah, sure, it’ll be grand”.

“The Blue Nile were looking for a guitar player, but I didn’t have my New York chops together, so some other guy got the gig. That showed me it wasn’t ‘grand’ at all, and that I needed to step it up. I realised I wasn’t a virtuosic guitar player, but I knew I had a certain aesthetic, a certain style, and so that’s what I needed to define. As you can imagine, there are loads of guitar players in New York, so if you want to get noticed, it’s just about defining yourself.”

Leonard’s name and style of guitar playing – ambient but with a crunch and lyricism – began to be noticed, and before long he and his band Spooky Ghost became a blip on David Bowie’s radar.

Another recommendation, this time from an engineer and producer friend, Mark Plati, who had worked on Bowie’s 1997 album, Earthling, directed the man towards checking out the Dubliner.

“He came and saw me at this coffee house, which held about 50 people. I played fairly regularly as Spooky Ghost; we would improvise a little bit and show Betty Boop cartoons in the background. It was a bit of a scene. We would perform, pack out the place, and they’d make coffee between songs. Everyone would just hunker down for an hour and enjoy it.

“Anyway, Bowie sat in the audience on a rickety chair and ended up heckling me during the show. I knew he was there, and he knew that I knew he was there, but it broke the ice. After the show he asked me if I would join the band, first for the Meltdown Festival [2002] and then what became the Reality tour.”

Subsequently, Bowie appointed Leonard as musical director of that tour, and the relationship continued up to the writing and recording of 2013’s The Next Day.

Leonard has had no involvement in Blackstar; “We had a conversation prior to him making it. He told me that he was going to do something very different, and I understood that.”

What does Bowie look for in a collaborator or musical associate? “I think he likes you to be who you are. He likes things to be a little raw. What is thrilling about seeing people play is when the music isn’t scripted or planned. When the musicians around you are doing the same thing, then what you’re doing becomes amplified, you get that crackle, you get the unexpected. I think that’s what he looks for in people.”

And what does Leonard look for when it comes to working with people such as Bowie, Laurie Anderson and others?

“I really try and be part of the creative process and the solution to things. My role is supportive, collaborative, but it’s essentially about listening to what the artist wants, translating that, realising their ideas. That’s much better to me than trying to wedge myself into people’s lives or getting territorial about being the buffer zone between the artist and the world. That doesn’t interest me because that’s a different agenda.”

The Dublin Bowie Festival takes place on Saturday and Sunday, at the Grand Social, Dublin.

Events on Saturday include a Collectors’ Merchandise market, the Queen Bitch Quiz, featuring 10 rounds of questions to test even the most clued-in Bowie fan; a Bowie Birthday Bash, featuring a “Bowieoke” session, DJs and Bowie cover act Rebel Rebel, featuring guest Gerry Leonard, who will also do a Q&A and solo show on Sunday Night.

Events on Sunday include a run of documentaries and Bowie’s most celebrated film, The Man Who Fell to Earth.