Meanwhile, here are the new videos : 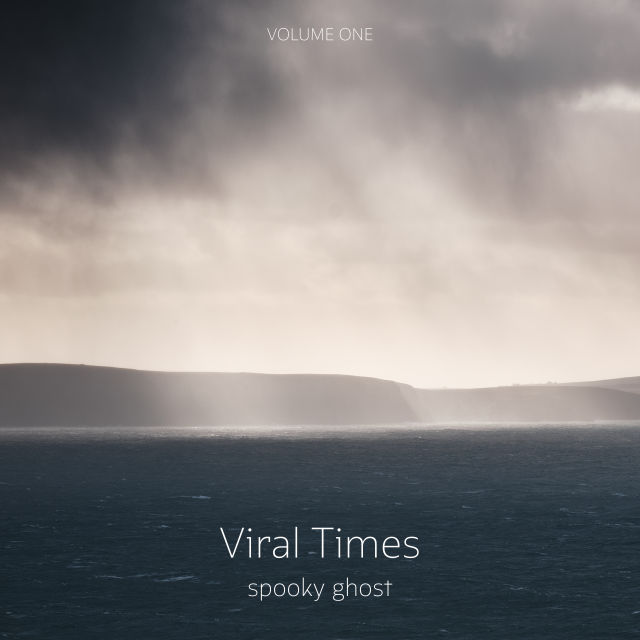 Major events happening throughout the history of the world, they have always been a constant font of inspiration for artists in any sort of art form, no matter about their cause or the time when said events took place. It is almost like a part of our spirituality get either hugely enriched or wounded, by the consequences of those extraordinary moments, urging an artist to express the emotive impact that such events brought into his/her own world in their own, unique way.
This may be as well the emotional route that brought the Irish Guitar Maestro, Producer and Musical Director Gerry Leonard, to release, under his pseudonym Spooky Ghost, after almost 18 years, the follow-up to an inspired record like 2002’s The Light Machine.
The new record, which might be as well the first of a series of mini EP later to be released, it is called Viral Times Vol. 1, where the four instrumental tunes included in this mini-album, together with confirming, once again, Leonard’s remarkable skills as a guitarist, they also give an unique opportunity to those who have known the New-York based artist mainly due to his musical association to some of the biggest names in the music business, from Suzanne Vega to David Bowie or Laurie Anderson, just to mention a few, also to appreciate Leonard’s special gift to assemble different layers of sound and create sonic structures of delicate complexity and ethereal beauty at the same time.
Leonard’s ability in translating his moods and reflecting about the world surrounding him right now, without talking but just letting the music speak on his behalf, it is inspired and highly refined.
The two central movements VT11 and VT06 from Viral Times Vol. 1 are elegant, atmospheric and occasionally other-worldly, like those sounds would be coming directly from a lost planet somewhere in the galaxy, with Leonard translating to the listener those fascinating waves of sounds by him created, through his own personal and exciting musical esperanto,
The two movements that open and close the EP, VT15 and VT12B, included into Leonard a.k.a Spooky Ghost’s new album, they move into slightly different territories, but still depicting perfectly the emotional roots and the concept intended by Leonard/Spooky Ghost at the time that Viral Times Vol. 1 was conceived. While the closing VT12B instrumental moves away from the ethereal dissonances expressed on VT11 and VT06, Leonard’s guitar returns to take again center stage into the structure of the whole EP, with light layers of drum machine added to the tune.
In some respects, the opening tune VT15 is the one that better defines not only the whole concept behind the making of Viral Times Vol.1, but also the highly intriguing and sophisticated musical vision possessed by the Irish Guitar Prodigy, something that he so perfectly translates through his musical alias Spooky Ghost. Leonard’s enormous talent as a guitarist here shines in all its beauty, throughout the six and a half minutes of its duration, shaping a marvelous sonic kaleidoscope that will last right ’til the end of the record, reinstating, at the same time, why Leonard is so much loved, respected and appreciated in the whole of the music industry.
Viral Times Vol. 1 is a very welcomed return, for the Spooky Ghost project, a project that clearly allows an artist of the caliber of Gerry Leonard to unleash an alternative, seductive and almost spiritual side of his personal musical vision. If difficult times like the ones we are living right now are also bringing, on a more positive side, record releases of this quality, the future of music will be never in doubt.

Viral Times Vol. 1 is out now and it is available via Gerry Leonard/Spooky Ghost Official Website

Spookyghost
View all posts by Gerry Leonard →
This entry was posted in News. Bookmark the permalink.